Quote of the Week: "Always Do Your Best"

Your best is going to change from moment to moment; it will be different when you are healthy as opposed to sick. Under any circumstance, simply do your best, and you will avoid self-judgement, self-abuse, and regret.

Find the courage to ask questions and to express what you really want. Communicate with others as clearly as you can to avoid misunderstandings, sadness, and dramam. With just this one agreement, you can completely transform your life. 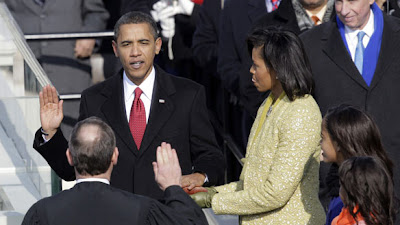 1. Masses and masses of happy, hopeful people. The emotional voltage was so high and so positive on Tuesday that it was as though, for this brief moment in time, everything was right and fulfilling in our world.

2. There’s always a comedian in the crowd…THANK GOD! There is no way we could have endured seven hours of standing, with no room to move, without jokes! I even pulled off one or two. You know it must have been super cold if people were laughing at my jokes. Where I was, there were about three or four funny people in the group that keep us laughing and in good spirits. I have a new-found appreciation for funny, extroverted people. Ya’ll are life savers!

4. Black people carry the Electric Slide and the Cha-Cha Slide EVERYWHERE, LOL! Seriously, there was no place to move, feet damn near frozen, and you’re shivering non-stop, then somebody sings out “MOVE TO THE LEFT!” The crowd would explod with laughter as we...MOVED TO THE LEFT, LOL!

5. Brooklyn is EVERYWHERE! I was between a white couple from Wyoming and a black family from Brooklyn and we all became instant “friends.” Brooklyn is always in the house!

6. I don’t know if this was showed on television, but every time a Bush (George, George, or Barbara) appeared on the Jumbotron, they got booed royally. The booing was so loud and long and dark that it even surprised me. I think some of those boos must have emerged from our ancestors The sound was guttural, from a deep-rooted place! Dick Cheney got it too, of course.

7. When Bill Clinton appeared on the screen, he was cheered. There were two people, however, who wouldn’t give it up for Clinton: me and this other black woman. That was the only time I felt disconnected on Tuesday. Didn’t care one bit.

8. If we are to do labels, then this much is true: President Obama is bi-racial: got it! Most people don’t identify him in those racial terms, but opt for African American instead: true. Interesting to see this concentrated embracing of Black culture and the Black aesthetic from our new president. It was a lot and I ain't mad. Aretha Franklin, Joseph Lowery on the program? Jay-Z a featured performer at the inaugural ball? WOW!
No comments:

Quote of the Week: "Don't Take Anything Personally"

Nothing others do is because of you. What others say and do is a projection of their own reality, their own dream. When you are immune to the opinions and actions of others, you won't be the victim of needless suffering.

"Why do the police terrorize our communities?"

When I was a student at Howard, I was at one of the countless grassroots organizing meetings regarding some madness that was going on in DC. I don't even remember what the specific subject was, who got shot, who was wronged, or anything like that. I simply remember that it was about police brutality and a group of us were there to do our part in putting the pressure on the police department.

Rafiki, one of the older adult organizers from the All African People's Revoluntionary Party asked one of his thought provoking questions in the course of our deconstructing what happened and how we were going to resond.

"Why do the police terrorize our communities?" he asked matter-of-factly.

Quietly (and naively) I thought, "Finally! Someone is going to shed some insight on this age-old crisis. I just knew this wise older man was about to open the floodgates of wisdom with a new angle, a new insight. The Party was good for that. They are supper skilled critical thinkers. I flocked to them like a child, wanting to soak up as much perspective as I could from them. My 20 20 something year old simple self wanted him to hurry up with the answer but he savored the moment. It was a surreal moment. Pure theater. We were all like, Why?!?"

Awwww man! Is that it? I thought. That was too simple. I was looking for a deep answer and expecting trumpets.

Little did I know...
No comments:

Quote of the Week: "Be Impeccable with Your Word"

Speak with integrity. Say only what you mean. Avoid using the word to speak against yourself or to gossip about others. Use the power of your word in the direction of truth and love.

* I LOVE this book!
No comments: