My "Going Away" Party

Today is the first day of spring and I had a going away party recently. I learned the hard way that I had to do something bold to sweep away the things, the people, and the energy in my life that were eroding me. My extra special guest was Tardy. You know Tardy, don't you? Always late, no time management skills, and hugely popular. Tardy bought two of her closest friends, Mai Excusis and Just T. Ficayshuns. I invited them all but gave a single condition: That they must arrive and be willing to play the surprise game that I had planned. They agreed, never being the ones to turn down a party or to be with their own kind.

When they arrived, I made them strip naked. They were anxious but willing. I think they thought that I had some men in the back, ready to do their bidding. They're kinda bold like that. So they striped naked and I looked the trio from all angles. I observed them wandering around the apartment, mindlessly waiting for company and the fun to begin. They don't know that they are coming only to be put down. Didn't feel sorry for them, though.

After a while, I gathered them around and said, very clearly: "I invited you all here today to tell you something. I want you to listen closely. All of y'all make me sick. You make me look bad, and I'm done with you. We ain't friends, we ain't cool, and you got to get the hell up out of here!"

And with that, it was over. I've been moving deliberately ever since. Amazing what happens when you make up your mind. I have not been late to anything for two weeks straight. In fact, I arrive to my appointments early. I'm thrilled!

My next going away party is for what I call my "communication debt." I'm flipping through my scraps of paper now to see who I owe a phone call to.

In the beginning there was the word

Words are the units of language that we use to carry meaning, to ascribe value, to speak or write our truths. Throughout the history of the world, words have been perceived to have a sacred power, one that could be constructive or destructive. Like living beings, words have an origin and a history. They change form over time, they adapt to their environments, and they carry a lot of energy.

Energy is from the Greek word energos which means "active, working". It is also the word we use to define all kinds of natural phenomena. We also know that energy is converted from one form to another, but it is never created or destroyed.

Somehow, in popular culture, we have come to devalue this mighty vessel, the word. "B*tch" is a safe curse word these days...like "hell." Few people born after 1978 understand why all the fuss over the word "nigg@." Our language continues to be misguided, aggressive, or straight up violent. It does sneak up on you:

As our minds expand, so will the words we use and the meanings we ascribe to them. Best that we stay focused on the fact that words house energy. They can brighten up or darken a room. They can nurture or negate our own sense of worth. They can even help guide a nation into a new way of thinking. Yes, they can.


Nearly 2.6 million people nationwide loss their jobs in 2008. Roughly, that’s equivalent to every man, woman, and child in Brooklyn. In this economic crisis, people are losing more than their ability to make ends meet, they are also losing their confidence in the things that matter, but that might prove more rewarding than one could imagine.

Funny thing, this word confidence. Normally, it’s defined as trust or self-assurance but to economists, retailers, and government agencies, confidence is about science. The Consumer Confidence Index, for example, is a survey that samples 5,000 US households. It plays a key role in communicating the health of the economy. It follows that when people don’t trust that they will get or keep a job, they don’t spend money. When money circulation slows, confidence in the economy drops, resulting in job loss. In New York City, we’re told that by 2010, approximately 165,000 private-sector jobs could be lost. That’s Fort Greene, Brooklyn Heights, plus more than half of Bushwick.


Job loss, the accompanying shame, and the social demotion are profoundly damaging. In many cases, its deadly. Increasingly, reports indicate that people are robbing banks to pay back rent - or worse, committing suicide because of the pressures mounted from this crisis. Some people have taken the lives of family members, as well. In New York, two months ago, a wealthy money manager cut both his wrists and bled to death in his Manhattan office. Apparently, he “could not cope with the pressure” from the Madoff scandal.

No person’s loss is ever what it seems and what drives a person to extreme measures as these should not be judged on news reports alone. It does make sense, however, to question the general context by which we live our lives. These tragic happenings seem to speak more to the unforgiving pillars upon which society is built, then to people’s ability or inability to survive their crisis.

In the background, media and popular culture do an excellent job of bombarding us with the idea that we are more “consumer” than ‘citizen;’ no…more “product” than “human beings.” We are “products of our environment” or “target markets.” This language (and the mindset that births it) is part of the reason people are grounded in material things and not in the more enduring elements of life.

But if approximately 7,000 jobs were lost per day in 2008, where do the intangibles, like hope and confidence, fit in?

As someone self-employed for the past ten years, I volley between “feast or famine” often, irrespective of this Consumer Confidence Index. According to my bank account, I am among the working-poor, but my bank account is not how I identify myself, nor the people around me.

At forty, I am learning that I am more than what I can prove. Now, life at a premium includes knowing that success is less about what matters and more about appreciating and making the distinction from who I am, what I do, and what I have.

----
April Silver is a social entrepreneur, activist, and writer. She is Founder and President of AKILA WORKSONGS, a Brooklyn-based, nationally recognized communications agency focusing on arts & activism. Her first book, "Be a Father to Your Child," is the critically acclaimed anthology on black fatherhood. Her blog, aprilisms, can be found at www.aprilsilver.com
2 comments:

I'm With Boycotting Barnes & Noble, If... 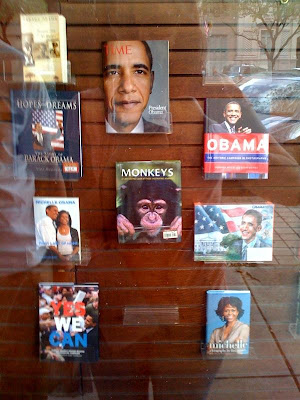 This image has been circulating around the Internet. I saw it on Facebook this weekend and I got it twice this morning. Rightfully so, there is a call for a boycott of this bookstore. The claim is that this picture was taken at a Barnes & Noble in Florida and that we should boycott all Barnes and Noble stores and their afflilates. I'm with that...if we can prove that it's Barnes & Noble that we should be boycotting.

The image above certainly looks like a Barnes & Noble window display, but we must be sure. If anyone has more details about this picture, please share them here or at pr@akilaworksongs.com. I'm with joining a boycott, putting the store on blast, writing a letter, and putting pressure on the chain. And I offer this as someone whose book is retailed at this chain. But I believe we must be precise in our defense. Even in all my battle fatigue on the madness of race, I know we must first ask an important question: How do we know this is BN and not a Border's, for example?
Holla back!

I Am Not Blogging!

Well, that's how I felt about previous announcements about me re-launching my blog. I've had my blog for years. My interest in "blogging" would shift as easily as my moods, but I'd always encourage my clients: You just HAVE to blog! It's a great way to connect with people." I'd bark about the power of the blog, but wasn't even invested myself.

Then sometime last summer, I challengened myself. I said I would blog EVERYDAY and I was all super aggressive about it...in my mind. Then I wore myself out. It's damn near impossible to do that with a schedule as demanding as mine. Still, I had to prove to myself. I tried. Then I'd decrease the frequency. Still, I'd blog, but only privately. I wasn't ready just yet to go live.

What the hell is a "blogger" anyway? It sounds like a cheap tag for non-writers who vent online. I, and so many other creative people I know, are writers who take the craft for more seriously. So with that in mind, the pressure is off. I'm not blogging, but I do write commentary, poetry, and I love sharing info info on this site, a blog named "aprilisms."